View source
watch 02:17
New Pokemon Games - The Loop
Do you like this video?
Play Sound

The 13's Jason, or so-called "Juuzou's Jason", is a rinkaku-type quinque made out of the kakuhou of Yakumo Oomori or Yamori. It has the shape of an L before making a very sharp tip at the end and looks very much like a scythe[1].

The 13's Jason only has one stage.

This stage is the first and only stage of the Quinque. 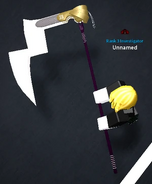