watch 03:19
Wiki Targeted (Games)
Do you like this video?
Play Sound

Doujima is Amon Koutarou's quinque. Its first stage was broken in a duel between Amon and Kaneki and later repaired and upgraded by the use of the Bin Brothers' kakukous, becoming what is considered in-game as Stage 2. It is that of a large, two-handed club and later becoming a lance which is somehow handled with one hand.

Doujima is a koukaku quinque that takes the form of a club with a big handle suited for two-handed users. This is the first model of Doujima before it was first broken.

Doujima's Stage 2 changes the shape of the quinque, taking the form of a spear with a conical lance-like head. It is very versatile and allows for quick movement and engagements. Previously, Stage 2 was held with both hands and had a handle guard. Now, it is wielded with one hand and no longer has the handle guard. This form is the repaired and upgraded version with the use of the Bin Brothers' kakukous. 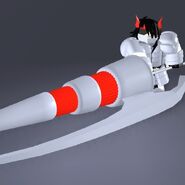 Doujima Stage 2 (Former)
Add a photo to this gallery
Retrieved from "https://roghoul-rblx.fandom.com/wiki/Doujima?oldid=57093"
Community content is available under CC-BY-SA unless otherwise noted.