View source
watch 02:52
Roblox: DeepWoken - The Loop
Do you like this video?
Play Sound

Kaneki is one of the kagunes players can get in Ro-Ghoul. Kaneki is built specifically for close-range combat. There are six stages for Kaneki, two being incomplete kakuja stages and the final being a modified version of the kagune. The original owner of the kagune was Rize Kamishiro, until the steel beam incident occurred[1]; where Ken Kaneki was mortally wounded, and thus received an organ transplant from Rize, which included the kakuhous[2], kicking off the series.

There are six stages to the kagune.

Stage 1 features three Rinkaku tentacles. They are versatile, flexible, and quick. They are covered in scales and sport a faint neon outline glow that uses the secondary color of the user for the outline and the veins that run across certain parts of the tentacles.

Stage 2 adds another rinkaku tentacle, making a total of four. The tentacles are curved, end in a point, and move rather fluidly. This kagune is similar to the first stage as it sports the same glow, scales, and veins, the only difference being the number of tentacles and their length.

Stage 3 features four Rinkaku tentacles just like Stage 2, but the tentacles are longer and slimmer.

Stage 4 is the first form of Kaneki's kakuja, though incomplete. The cooldowns for each special increase the longer the kakuja is active. The user's screen will begin to shake. This kakuja takes on the appearance of a long centipede-like tail adorned with sharp protrusions resembling centipede legs and terminating in a blunt, shovel-shaped tip. Unlike other Kakuja's, this stage has no mask.

Stage 5 is the second stage of the kakuja, still being incomplete. It is a combination of old stage 3's four rinkaku tentacles and stage 4's centipede tail. The user's kakuja manifests itself as four rinkaku tentacles with two centipede limbs protruding out to their side (although smaller than stage 4). The user has a kakuja mask that appears to hide the left eye but leaves the right eye visible. It has a single giant pitch-black eye in it and is shaped similar to an owl with a beak-like protrusion. While this stage is active, the user will dash further. Like in Stage 4, the user's screen will begin to shake and the user will experience hallucinations and manifestations of the memories of Ken Kaneki-- the previous "owner". Using this kakuja grants the user a slight dash speed and dash distance buff

Stage 6 of the kagune is different from all other stages. Instead of being a kakuja, it is instead a new form and manifestation of his kagune after his centipede kakujas (PKKen = "Post-Kakuja Ken"). It features six long, thin, and rigid limbs with three on each side of the user. The front and back limbs are used to maneuver, whereas the middle two limbs are poised behind the shoulder. Occasionally, veins will glow or pulse on the limbs before fading back out, only to pulse into existence again. The appearance is similar to arachnids, despite the fact that the class has eight legs and not six. Using this stage grants the user a further enhanced dash speed and distance buff 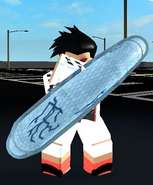 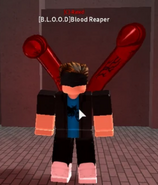 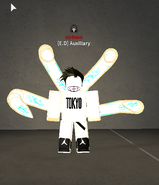