View source
watch 01:54
Arcane: League of Legends - The Loop
Do you like this video?
Play Sound

Lycan is an original creation (OC) kagune added to Ro-Ghoul during the Halloween of 2020. The kagune has two stages, with its kakuja being one of the most unique kakujas in-game. Its kakuja is that of a werewolf.

Lycan features 2 stages: Stage 1 is the normal kagune and Stage 2 is the complete kakuja.

Stage 1 is a pair of two massive, four-fingered hands that sprout from the user's shoulders. Each arm is extended by a large, blade-like protrusion and the hands terminate in black claws. Extra growths on the shoulder and neck are tipped with spikes.

Stage 2 of Lycan is the kakuja. The user will leap into the air, flip, then transform into a werewolf with what appears to be crude plate armour held with straps, roughly covering their torso and limbs. This is the smallest body-enveloping Kakuja, with it's quadrupedal stance being shorter than a player. 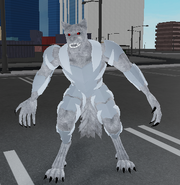 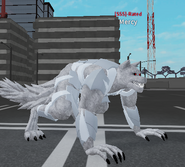