View source
watch 02:56
Raise a Floppa - The Loop
Do you like this video?
Play Sound

Narukami is an ukaku type quinque, which in the manga and anime was wielded by Kishou Arima. It discharges condensed RC Cells just like lightning bolts. Possessing a tracking function, evasion of the bolts is next to impossible[1]. Narukami has 2 modes: The ranged mode (Long ranged) and the blade mode (close range). It is the most expensive quinque tied with SSS Owl.

Narukami does not have stages, but instead has 2 modes: Blade and Ranged. The user can change between modes freely by pressing the "C" key. There are no requirements to change modes.

Narukami's blade unfolds into multiple prongs that spread out from the center. This mode focuses on ranged engagements, using the quinque to discharge the condensed RC Cells at opponents. 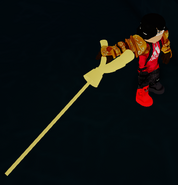